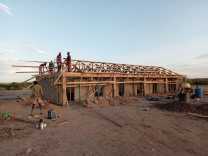 Progress!  The construction of the teacher's accommodation block is underway. 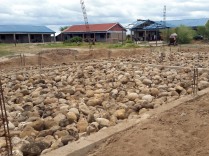 Please go to the DONATE page to see how you can help!

In 2014 The MCFT started assisting the El Bokoch Primary School by providing school materials and books, as well as the children's daily meal.

We are back on the task of urgent fundraising to allow us to build another two classrooms and a library for El Bokoch School.

Due to the critical food shortage in Ileret we held the A-MAIZE APPEAL and raised the funds to buy 13.5 tonnes of maize, which Liza Cronhelm personally delivered and distributed to the people in Ileret.  This trip was combined with putting the finishing touches on the two classrooms constructed in 2016.  The floors and walls were plastered and look fantastic.

Liza Cronhelm spent two months in Ileret building the second set of two classrooms. There is still some finishing work to be done in 2017 but wonderful to have the building up and enclosed. What a huge success!  El Bokoch now has four new classrooms.

Liza Cronhelm spent three months working in Kenya (June - September 2015) at the school building two classrooms and laying foundations for the next two classrooms, which will be completed early next year. In addition to a library and teacher's accommodation.

Amy Cronhelm joined Liza for two weeks on the project and said "What an amazing achievement by Liza, Korie and the building team. This environment has many challenges combined with everything having to be done by hand ... the making of thousands of hand-made bricks, bucketing out thousands of gallons of water from the deep bore hole in the dry river bed ... such a massive team effort!

Please see below our newsletter giving our donors and supporters an update of the El Bokoch Primary School project.

“Hello, how are you and how do you do? We hope that you are doing well, we are well and fine here in Ileret.

Last year you had done a very great and important job at El Bokoch community. And we as El Bokoch Elders appreciated you in a great and special way for the great and amazing classes you built. We even don’t know how to say thanks to you for your big help.

We again still need you to come and work with us for the remaining part. This is because Eel-Bokoch had took very many kids to school so that the kids can get the important knowledge. As elders we thanks you big and again we need you to come and accomplish your mission to this community.”

Currently, 96 children are catered for in five grades and in 2016 the school is performing far better than ever before which has been greatly appreciated by the elders and parents in the El Bokoch area. For the 2nd term a newly qualified woman teacher from the community started the first in the school’s history. Margaret Chumakan is doing a fantastic job of up skilling the unqualified teachers and making sure the pupils are getting a quality education.

James Korie Haile in Ileret continues to do an amazing job of supporting so many in the El Bokoch area, improving their lives and overseeing our education facilities.

Our goal in 2016 is to complete the second set of classrooms which were started last year.

Amy and Liza are currently fund raising for Phase 2 of the building project. We are asking you all to donate critically needed funds so that this valuable work in building a school for the Daasanach children can continue.

Thank you for your support in making this happen. You, the wonderful people who have been part of this tremendous effort to build educational facilities for the Daasanach children have made such a positive impact in their lives.

The Michael Cronhelm Memorial Library was completed in September 2010. The ongoing supply of books for this community will be a lifelong commitment.  The children of Ileret have benefited enormously by having access to books.

"Books are the treasured wealth of the world and the fit inheritance of generations and nations".  Henry David Thoreau

Funding for all our projects is through private and corporate donations.

The Nursery class was established in 2012 in the grounds of the library. These classes are important to prepare the children for their Primary education and to provide a much-needed after-class meal. 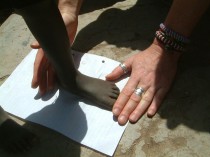 Support of the school children in the Laikipia region of Kenya with contributions towards school materials and new school uniforms for all 80 students.

TO MAKE A DONATION THROUGH PAYPAL TO THE MCFT (NZ FOUNDATION) CLICK ON THE YELLOW BUTTON BELOW - THANK YOU!